A Brass Band Contest at Manchester

The following page comes from The School Music Review: A Monthly Periodical Devoted to the Interest of Music in Schools, 1 October 1916. Like other London-based music journals the reporting is indicative of a style of writing that was anthropological in nature. In other words the brass bands at Belle Vue  came to represent a highly reportable aspect of the working-class at leisure. From the 1840s onwards brass band contests attracted large numbers of followers. It was in the  venue of Belle Vue where reporters from the metropolis could try and understand a growing working class and the nature of one of their hobbies.

In this way, together with other contributing factors such as the fame and success of ‘crack’ bands from the North, an external view of the working class at play was constructed. By the First World War this reporting had reached its height and in spite of  the brass band being a national movement the construction of a clichéd identity of Northern working-class brass bands was complete.

(These themes are explored in greater detail in my forthcoming article, ‘Southern Pennine Brass Bands and the Creation of Northern Identity, ca. 1840-1914: Musical Constructions of Space, Place and Region’, Northern History, February, 2017, pp. 1-18) 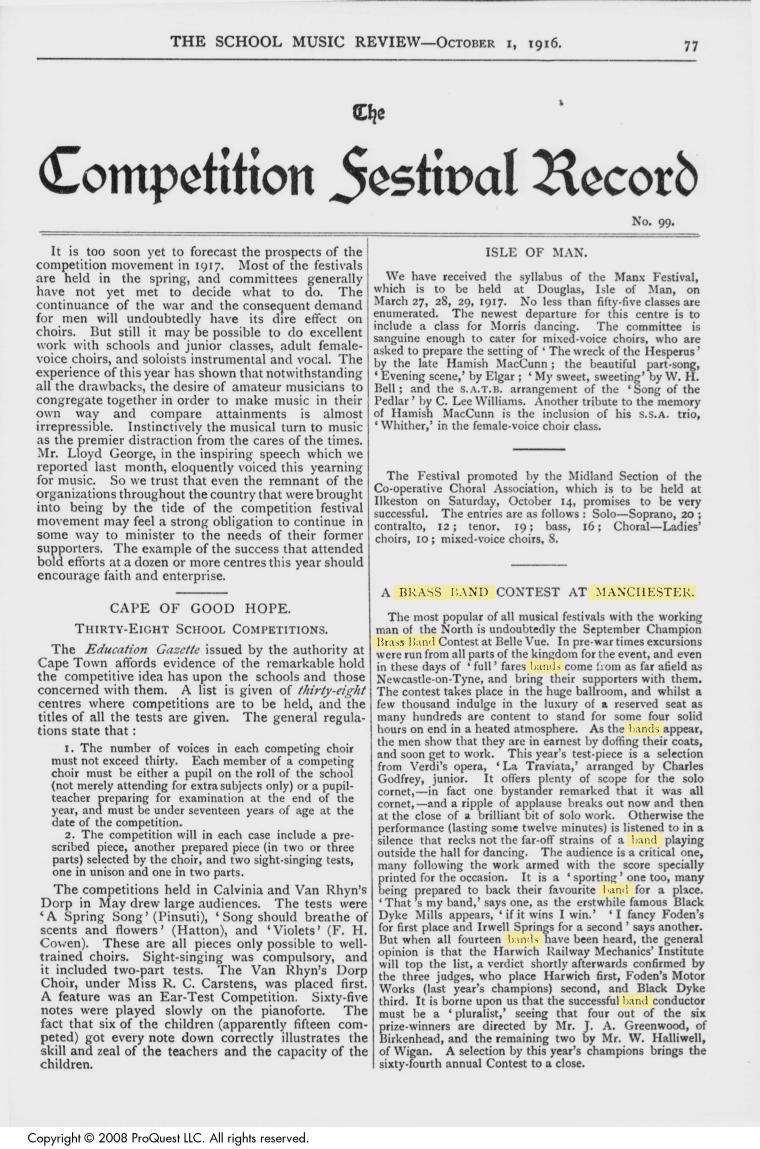 “That Minutes of Last Meeting Pass as Read”: Helmshore Prize Band’s Committee Meeting Minutes, A Case Study of ‘Life as Normal’ and ‘Moral Contracts’ in the First World War

Helmshore Prize Brass Band were formed in the 1870s and were active in East Lancashire’s Rossendale Valley in the late nineteenth century and throughout the First World War and beyond. They could not be considered a ‘crack’ band, but they were ambitious, entering the majority of local contests and employing trainers and players that would help them win.[1] This was the experience of most bands from the 1860s onwards. Like other bands in the regions surrounding Manchester Helmshore were driven by the need to raise money for the purchase and upkeep of instruments, uniforms and music. In addition, they had to maintain and run a bandroom where they could not only rehearse but also hold social events. [2]

END_OF_DOCUMENT_TOKEN_TO_BE_REPLACED

Figure 1. French, Belgian and Russian Prisoners of War forming a band. Including, with the baton, ‘the man fro’ Lancashire’. (Rossendale Free Press, 3 June, 1916)

On June 3, 1916, the Rossendale Free Press published this picture which included an unknown ‘man fro’ Lancashire’, who, the photograph and the newspaper suggests, was the conductor of a ‘scratch band’ of musicians in an unknown German prisoner of war camp. The piece intrigued me not only because it tells us a little about the nature of these camps, but also because the local reporting from Rossendale, in East Lancashire, informs us about the musical nature of people in the regions surrounding Manchester, the very people that would have attended concerts, park events and brass band contests in the city.