This post builds on 2 previous blog posts surrounding women on the stage during World War One and Gender in Musical theatre.

In a blog post entitled ‘Gender differences on the stage in 1913’, i discussed how prior to the breakout of war, the theatre was not class specific and that all women were invited to audition, being judged on talent rather than social status. The theatre, however, did not pay women well with most earning next to nothing and with the majority expected to provide their own costumes for the play. Some women excelled in costume making such as Juliette Dika, a Parisian soprano (pictured above in June 1914) who became famous for the dresses that she made for herself. Despite women being badly paid in Musical theatre they were relied upon heavily by theatre companies during the war.

In the 18 months prior to the war women were pictured in 17 of the 41 articles for Musical Theatre in the Manchester Programme, men were pictured in 15 articles and 9 pictures featured both a man and a woman. This is fairly even, however once the war started the number of women appearing in the article’s pictures rose drastically whereas the number of men pictured remained fairly steady as you can see in the graph below. 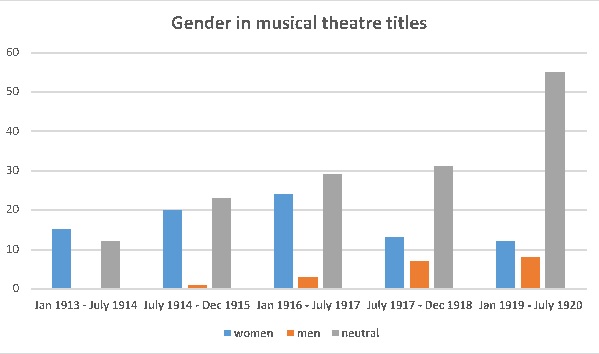 If the articles featured more women due to there being less men then you would expect there to be less pictures of men, however the pictures of men in articles remained steady. If the Manchester Programme used women as a way of advertising, however, it would be because they thought that women were more likely to draw audiences. Why then were the producers and writers of plays titling them in a more gender neutral fashion as the war progressed. Could it be something as simple as them having differing opinions at this time?