Foden’s Band, a partner of RNCM from Sandbach, Cheshire, was founded in 1900 and rose to prominence in the brass band world prior to WW1. Here is part of its rich history.

Foden’s Band was founded in 1900, initially as a consequence of celebrations of the Relief of Mafeking. After a few growing pains and fall-outs, the band was temporarily called the Elworth Band. Prior to the coronation of King Edward VII in 1902, the band was adopted by Edwin Foden (1841–1911), the proprietor of a local steam wagon works. He eventually re-named the ‘Foden Motor Works Band’ which, after some modest beginnings, improved drastically and achieved Championship Section status, winning the British Open Championships in 1912 and 1913. Since then the band has consistently ranked amongst the best brass bands in the world. Its rapid rise in standards was due to the Foden family appointing the best band trainers of the day, William Rimmer and William Halliwell. To this day the Foden’s Band’s calling card is a William Rimmer march, The Cossack (1904).

Brass bands are often fastidious about record keeping, and Foden’s has the benefit of an astonishing ledger, kept from its foundation until 1974, which has been compiled by Stewart Green (with additional information from long-serving members of the band) into an accessible form on the band’s website. Therefore this article has been written with the benefit of a reliable source of primary information.[i]

Always demanding the best for the band in both musicality and deportment, E.R. (Edwin Richard Foden 1870 – 1950, the founder’s son) ordered a new set of uniforms in the fashionable “Prussian” style (see image above of 1913, with conductor William Halliwell centre front, and solo cornet Edwin Firth centre back)[ii]. This was fortuitous, because in 1913 the band had the opportunity and honour to perform to King George V and Queen Mary as part of a Royal tour to see the Industrial North, based at the residential home of the Marquis of Crewe. A special programme was compiled, and the band travelled by steam wagon on the morning of 23rd April to perform at 09.30 in front of Crewe Hall:

Selection from Yeomen of the Guard (Sullivan)

Waltz from The Dollar Princess (Fall)

This was so well received, performed in the “Prussian” uniforms that they were commanded to play again the following morning at 0900.

On the brink of the First World War the band was on top form, and full of promise. The life of its solo cornetist Edwin Firth (1888 – 1918) showed extraordinary potential but took a strange twist.

Edwin was from a great brass band family. Grandfather Greenwood Firth was a trombonist with Black Dyke 1855 – 79, his father Squire played cornet in Black Dyke and became a professional band trainer. Edwin made his London debut as a solo cornet playing at the Crystal Palace brass band contest in 1902, age 13. Taught by the great tutors Alexander Owen and William Rimmer, he achieved one success after another. In 1908 he won a solo contest at Mytholmroyd. The second and third prizes were won by Fred Mortimer from Hebden Bridge and Arthur Webb of Houghton Main, who were to play very important roles in the story of Foden’s in the future. Needless to say, Foden’s spotted Edwin Firth and wanted him as a member. This required parental consent in 1908 because Edwin was still a minor at age 20, and in these times of hardship siblings were often required to stay at home and work to make ends meet.[iii] Foden’s suggested an in-house trade apprenticeship, but Edwin continued independant training as a watch-maker and as a musician. Later, Edwin settled on a combination of a job in Foden’s offices, plus a small remuneration for playing with the band. But Firth’s musical training was productive. In 1913 The British Bandsman periodical held a competition to find the best new march. This was won by Firth with his march “Westward Ho”, a simple piece still occasionally played today.
During 1914 Edwin made his first 78 rpm recordings with Foden’s, including Pandora and Cleopatra, fantasia polkas by Damaré, as a soloist for Edison Bell’s ‘The Winner’ record label. This disc was also pressed in Canada and USA by Gennett Records, and in brass band circles is considered a classic early brass band recording.

When Britain went to war with Germany on August 4th 1914 many of the men at the works and in the band wanted to sign up to take part in the fight for good. Edwin who was by now aged 25 years old stayed on at the works. He further firmed up his connections with Foden’s in 1916 by marrying Doris Twemlow (1892 – 1991), Edwin Foden’s grand-daughter.[iv]

At the outset of the First World War Foden’s Band endeavoured to help the war effort. Local concerts raised modest funds to help the National Relief Fund. A concert reported in the Nantwich Guardian described patriotic musical items, such as Firth playing Rule Britannia and continues in the same column with patriotic reports on the care of Belgian refugees at Sandbach.[v] It goes without saying that the Prussian-style uniforms and anything similarly Germanic had been put into cold storage at this time.

However, the aforementioned uniforms had at least one more exceptional outing. Foden’s band records mention a Sandbach May Festival on 27 May 1916 (teas provided) where a first prize was won by a float in the image of a German Zeppelin, made up by the joiners of Foden’s works, mounted on a steam wagon. Here the joiners wear the “Prussian” uniforms, and stand amongst soldiers.[vi] A commemorative postcard of the float was published at the time: 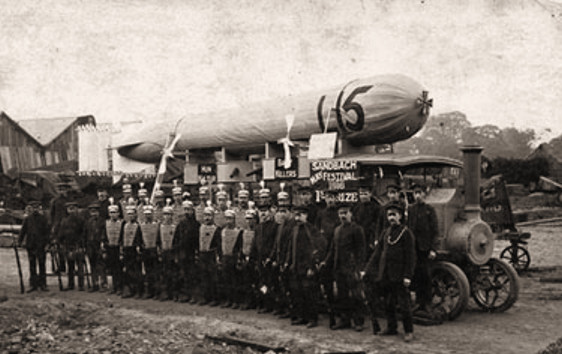 Edwin was eventually called up by the 28th London Regiment (Artists Rifles) during 1917, but in the meantime managed to balance this commitment with playing with the band at weekends and also seeing his wife. However, this situation could not last.

The Chester Chronicle wrote about one of Firth’s last concerts with Foden’s at The Grove, describing him as “one of Chester’s musical idols”. He played the Fée des Eaux polka by Saint-Jacombe to ecstatic applause. For his encore the reporter wrote “whether it was accidental, designed or prophetic, we cannot say, but his choice of Tosti’s Good Bye was at least a significant coincidence seeing that Mr Firth was called by the milirary to appear at Chester Castle on the following Wednesday. We understand that Mr Firth has got an extension otherwise it would have been awkward for Foden’s to be without their chief cornet player in the great Belle View Brass Band contest which is to be take place at Manchester tomorrow (Saturday).[vii] The last record there is of Firth playing with Foden’s or any ensemble is at a concert in the Lyceum Theatre, Crewe on 21st October 1917, according to the band’s ledger.

In February 1918 his company, the ‘Artists’ Rifles’ regiment was posted to the Somme and Edwin borrowed a battered cornet he had found in the band room, so he could keep his lip in condition, leaving his main instrument behind for his return. Harold Laycock, a brass band trombonist of high reputation, heard Edwin practising in the Somme quite by chance, and met him, reminiscing warmly about their early days in Yorkshire, and of Harold’s brother who was an excellent solo cornet player known to Edwin[viii]. But this cameraderie was short-lived. Tragically, Edwin was killed only a few days later on 1st June alongside his comrades by an exploding shell. Private Edwin Firth, service number 766890 of the London Regiment (Artists Rifles), age 29, is buried in the Varennes Military Cemetery, grave III E.13.

This was a personal tragedy. In April his wife Doris had just given birth to a baby boy, Edwin Twemlow Firth (Teddy). But Edwin Firth senior was a local hero. A Foden’s concert in Chester later that month was marked by a sad announcement, and a rendition of a favourite hymn “Sandon” in his memory.[ix] Foden’s band did not participate at the British Open Championship at Belle View in 1918 following this great loss to the brass band movement.

Edwin Firth’s name is listed on the war memorial at Elworth, and he was more recently commemorated in a street name; Firth Close, Sandbach CW11 1JH, alongside other greats of the brass band world. His wife Doris died in 1991 age 99, never having remarried. His six sisters were all musical and long-livers. His son Teddy died at age 75 in 1994, never having met his famous father

[i] I acknowledge kind permission from Foden’s Band to use information from <www.fodensband.co.uk/history>, accessed on 25/08/2016.

[ii] Thanks to Gavin Holman, for permission to use the images in this article, from www.ibew.org.uk accessed on 25/08/2016.

[iii] The Latey Committee’s recommendation that the age of majority be reduced from 21 to 18 was ratified by Parliament as late as 1970.